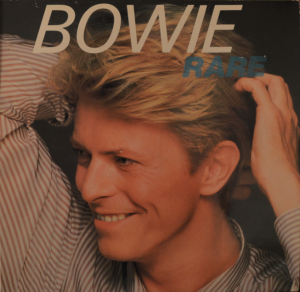 I was 15 when I fell for Bowie big time. One of the reasons why my adoration was so complete was that in 1983 Bowie, always a multi faceted artist, was at his most multi faceted. He was in the charts with Let’s Dance, there was the back catalogue (consisting of a run of LPs pretty much unrivalled in pop and rock) and he also had just released the 5 track Baal EP of songs by Brecht.

And then there was the release of this LP which had Bowie doing versions of songs by Brecht and Brel and Chuck Berry. My teachers at school and my Mum and Dad didn’t have the faintest idea of who Brecht or Brel were so it was up to me to pursue this sort of stuff – which is something I’ve continued to do in a pretty chaotic and pretty unproductive way ever since.

A million people have made the point that Bowie’s music was always an argument against the tedious, parochial life of England in the 70s and 80s. It was a way out of that world.  For me this LP was part of that process. If you listen to this LP as an impressionable 15 yr old you’re going to wonder about Brecht and when you follow up on it you enter into a world of revolutionary politics and Weimar Germany. You will learn about revolutionary approaches to theatre, approaches which raise fundamental questions about the nature of theatre and of art. In much of his theatre Brecht would deliberately distance the audience from the action in a way which would force a response from the audience that was intellectual rather than emotional.

By coincidence I was just thinking about all that Brechtian stuff in relation to Bowie’s song “Heroes”. Last week I went to Berlin and whilst there I went on a walking tour of Bowie’s Berlin (which was excellent – I really recommend it). The song was recorded in the Hansa studios in 1977 in what was then the still rather desolate centre of Berlin, just yards away from the Berlin Wall.  Bowie was in Berlin, in part, to put his life back together after chronic drug addiction in LA. So you have a man trying not be the person he was in a city still smashed up and carved up the terrible history of the C20th.

The song means a lot to the people of Berlin. Bowie played it at a gig near the Reichstag, which was by The Wall, a couple of years before The Wall came down. Large crowds of East Germans crowded by The Wall to listen to the gig. Bowie dedicated “Heroes” to them and the whole concert is seen as one of the key moments that lead up to the collapse of the Wall. I don’t begrudge the song being part of that history but I’m not sure it quite fits and I do begrudge it being used to symbolise Olympic success, like it’s some big, daft power ballad, as what happened in London 2012

I don’t think think that there is anything Brechtian about this song. The song is highly emotional and it is fully intended to pull at the audience’s heart strings – which is the sort of ‘bourgeois twaddle’ that Brecht set his hat against. However I do think that the Brechtian notion of distancing yourself from the emotional content of art does constitute a tiny bit of what’s going on with this song. Bowie, and Eno (the song’s producer) and Fripp (the song’s guitarist) are too smart and too knowing to have just churned out a big “bourgeois twaddly’ power ballad – the song is way more subtle than that.

All the various part of the songs are doing slightly different things. The producer Eno and the guitarist Robert Fripp create a big swollen epic wall of sound that churns on, almost hypnotically, until it fades away. This churning, rolling, slightly drone-y music intensifies in a way that forces Bowie’s voice to greater and greater levels of intensity – levels that becomes almost histrionic. By the end of the song this almost unhinged singing works in pretty clear contrast to the swollen and droning and, at times, almost languid music;  Bowie is almost screaming out the desire of the characters in the song to be something they’re not and the song never quite resolves itself – instead it just fades out. In this context what Bowie is singing sounds less like something affirmative – We are Heroes  – and more like something desperate and needy – We can be “Heroes”. The song isn’t about triumph over adversity or being a hero. It’s about the longing for those things, love that is desperately hoped for but is never the thing itself; it’s about moments of time clung to in the face of things unravelling. “Heroes” is about longing and love, I think,which is it told by someone who isn’t what they want to be.

And therefore, perhaps, there is something slightly Brechtian about putting the title “Heroes” in inverted commas. Maybe that little grammatical device, whilst hardly being the same as an actor breaking the 4th wall or suddenly commentating on his or her dramatic predicament, does call for a slight intellectual distancing from the song’s emotional content. This is pop music that is smart enough to create distance from itself.

When I take myself seriously I will always be on the side of ‘intellectual distancing’ in its war against ’emotional content’ though that war does appear to be almost lost.