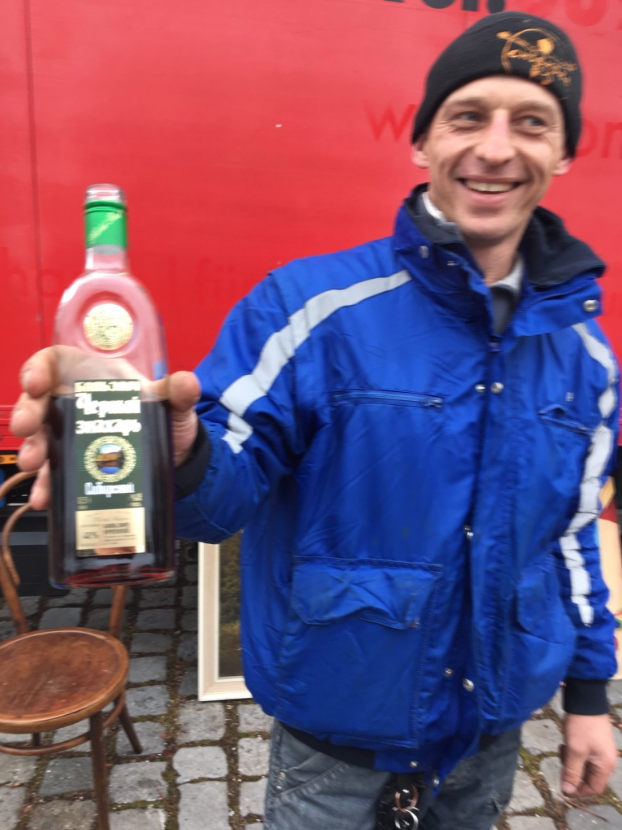 Yesterday at the Olympic Stadium flea market in Munich I met Gerhman – a trader who was originally from Vladivostok and who kept himself warm in the freezing fog with 40% proof Russian booze.

I got talking to Gerhman, who could speak Russian, German and English, whilst browsing through his boxes of old photos and magazines and postcards. He told me he was from Vladivostok and I told him that he was the first person that I’d ever met from there and that the city was so far to the East that it seemed as remote and exotic to me as Macau or Osaka or Manila. He told me that it was a beautiful city that sits between wooded mountains and the sea. He also told me that he had grown up there with his German parents.

I asked him why his German parents had been in Vladivostok and he shrugged dismissively. I wasn’t sure if he was dismissing my question and he just didn’t want to tell me or that it was too complicated to explain. Or maybe he never really knew.  I assumed that it had something to do with Russia and Germany being the central players in all the major revolutions and wars of the last century. I also assumed his name was given to him because of his German heritage and that it was either a nickname or it was given to him by his parents because of their nationality.

People won’t always tell me what I want to know so it’s just natural that I fill in the gaps and make up some of the details. I do that a lot at flea markets

Amongst Gerhman’s boxes was a photo album. I think these photos were of one woman’s life and her family beginning with photos of her parents during WW1 and her life during WW2 and her kids’ post war lives. The album ends in 1978. 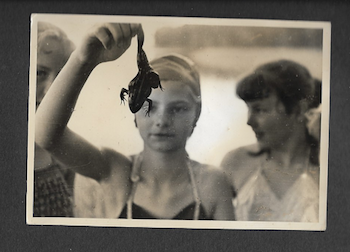 I have found a few photo albums and photo collections like these since I have been in Germany. I don’t know why I keep finding them here –  I have certainly never seen anything similar in carboot sales in the UK.

The dealers, who I think got them from house clearances, certainly regard them as worthless; each dealer I’ve bought a collection from has been delighted and I’ve had no problems haggling them down. A couple of dealers offered extra photos and albums as an incentive for me to buy the stuff.

The photos in this album are of one family.  I think the album was put together by the mother of the girl holding the frog. 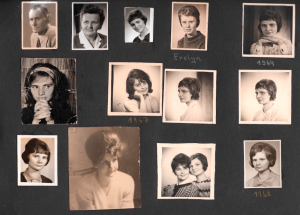 There are a few photos missing from the album but I think it’s fairly easy to piece together some aspects of who is who in the family. The girl in the photo above has a sister. The mother of the 2 girls married a man who was a soldier during the Second World War. Her father fought in the First World War. At least one of the sisters had children. I think they lived in Leipzig. Other details I can only guess at.

The big question is how does something like this; something this personal and intimate ( the album includes locks of the two sister’s hair) end up in a flea market? I do feel like I’m intruding into somebody else’s life – but I also see things in these family photos that remind me of my family. 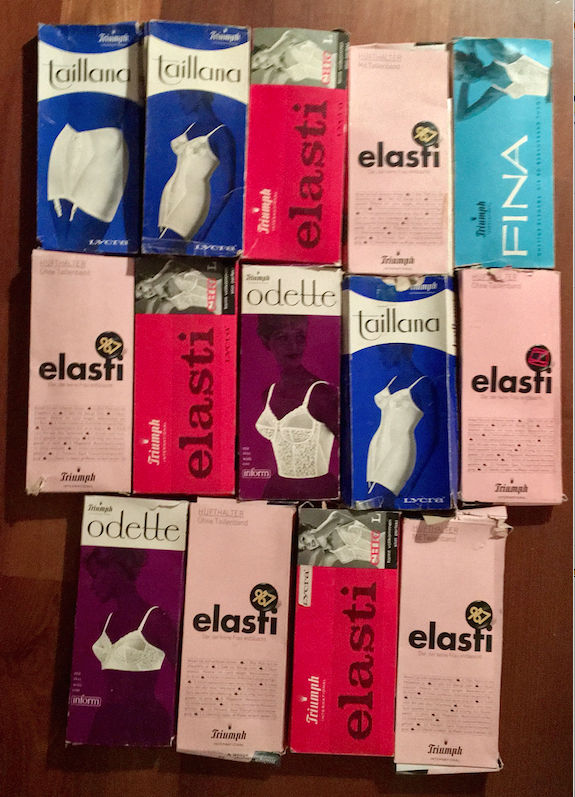 As I was paying the €8 that Gerhman wanted for the photo album (and for a few other things – including a truly awful Boney M poster) I noticed a box full of old fashioned bras and girdles on the floor.

Over the last few weeks I’ve been on UK radio, on The Late Tackle on Talk Sport, talking about some of this stuff that I find at flea markets and one of the things I’ve mentioned is that you see a lot of bras at German flea markets. I was just thinking whether I could photograph the box of bras so I could tweet the photo and talk about them on the radio – but Gerhman went in hard with his spiel.

“€30 – the photo album, the other stuff, the poster and all the bras and girdles”

“It’s cheaper to buy them all”

By now I was looking through the box. All the bras were, I think, ex shop display items so they were new but a bit shop soiled. The boxes they came in were original but tatty. Suddenly I was tempted.The flea market bra thing had been a theme for the last few weeks. I liked Gerhman.

Maybe I should buy them.

I bought them all.

I bought all 14 bras and girdles and whatever those all in one things are called (‘bodies?’, ‘corsets?’). I paid about €1.60 for each one. Gerhman was delighted. I immediately regretted my decision. “I just bought a load of pointy bras” is a funny line – but i’m not sure it’s funny to the value of €22.

However it turns out that this may be my biggest score in Germany so far. As soon as I got home I looked up what bras and girdles like these sell for on EBay and saw that one had just sold for £46.76.

£46.76! And I have 14 of them. Obviously I’m not banking on getting that much – but even if I get £20 per item selling them back in the UK that’s nearly £300.  So now, thanks to the hard sell of a man from Vladivostok, I’m in the business of being a retro bra importer.  It’s worth it – just for that sentence alone.

I don’t know if both boxes belonged to the same person. I’m assuming they did – because many of the photos in the first box are taken by someone who is deliberately objectifying his subject – and nothing objectifies a subject quite like pornography does. I don’t know that the two boxes were connected though.

I think some of the photos from the first box are excellent photos. I don’t know who these women are and probably never will, I don’t know who took the photos, I don’t know how they ended up in a flea market but any, or perhaps all, of the mystery that surrounds the unknowable aspects of these photos is intensified by the photographer seeming to have a voyeuristic instinct to objectify his subject. As somebody said on Twitter, after I posted the photo, the blonde who appears in a lot of these photos seems at time to be lost. Somebody else said they were a bit “murdery” and I think there is a bit of that too. I think they are, in a way, straying into the territory of Hitchcock or Powell’s Peeping Tom.

Or maybe they’re just some photos a bloke took of his wife.

THE KEY PLAYERS IN THE SHORT TALE WHICH FOLLOWS:

I can date my Bowie fandom from seeing Bauhaus doing Ziggy Stardust on telly on Top of the Pops in October 1982.

The day after Bauhaus were on telly a friend lent me the Ziggy Stardust LP. A few months later I bought it on cassette with my Xmas vouchers from the Virgin Store in Portsmouth. I also got a book called the David Bowie Black Book for Xmas. A few weeks later I picked up Lou Reed’s The Blue Mask from the WHSmiths at Ipswich Station (Lou Reed appeared in the Black Book – it was the first I knew of him). This in turn led to the Velvet Underground, Pop Art, all things New York and so on and so on.

I reckon that much of what has followed in my life, for better and worse, followed from that Bauhaus performance and from my ensuing Bowie obsession. The music I’ve listened to, the books I’ve read, the films I’ve watched, the people I’ve liked and even, in some ways, the places I’ve lived can also be traced back to seeing Bauhaus doing this song in 1982. This may seem like I’m overstating this but I think it’s true. I also think that the way most people are at 15 is fascinating, at least to themselves, and at least to themselves at both 15 and at 50.

I also bought the Bauhaus Ziggy Stardust single (with a cover of Eno’s Third Uncle on the b side – what an education) which I still have in my ‘Grave Goods Trunk’ along with the Black Book and the cassette of the Blue Mask (I lost the Ziggy S cassette years ago). I sort of liked Bauhaus a bit but grew out of them quite quickly. I’ve never grown out of Bowie and Reed and the rest.

The opening song on the Blue Mask is about the poet Delmore Schwartz. Earlier this year I read Saul Bellow’s Humboldt’s Gift which is about Bellow’s relationship with Schwartz so whatever was kickstarted by seeing Bauhaus on the telly 34 years ago is still unravelling and is still somehow all tied up together.

These photos are just a small selection of the many many bras you see at German – or specifically Bavarian – flea markets. The first stall you see as you enter the giant Munich Riem flea market by Messestadt Ost is huge stall selling brand new bras of all the colours under the sun. It looks like a giant bra rainbow.

I think Bavaria, with the exception of  Munich, is a very rural area and in the past had a pretty earthy relationship with nature – and with death. You see a lot of animal skins and skulls and pelts and antlers at Munich flea markets. I’ve seen a fair a bit of taxidermy at English carboots but nowhere as much as you see in Bavaria.