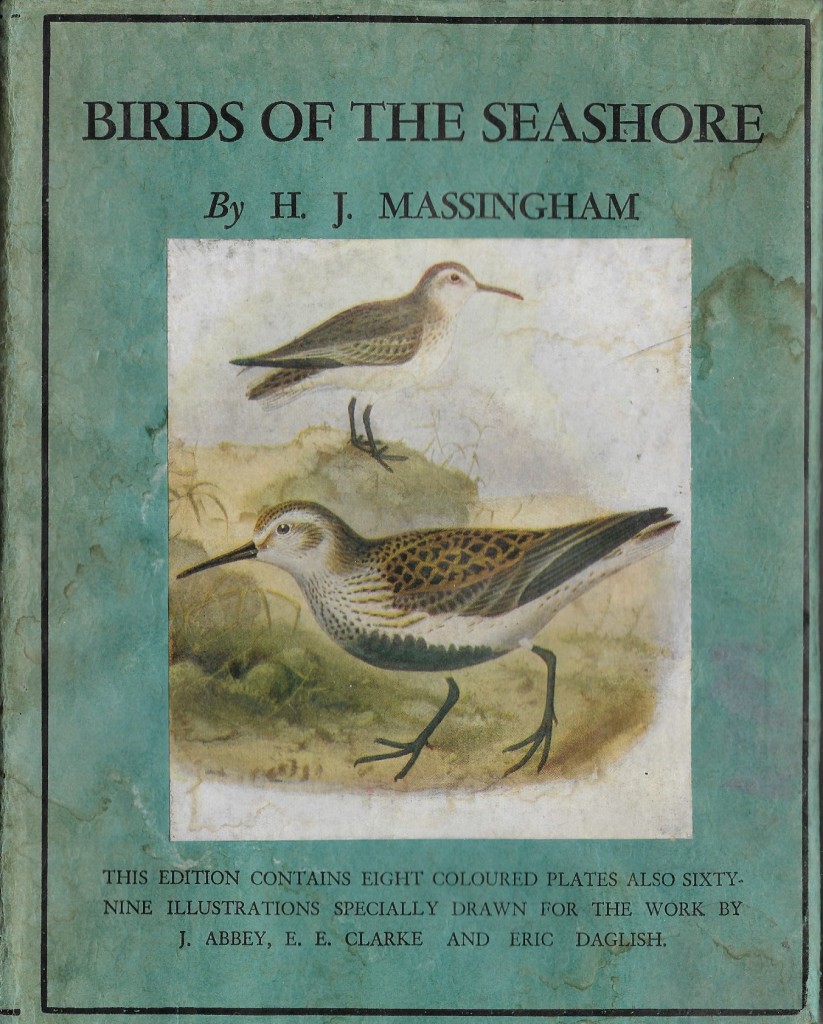 I picked up this book in a Cambridge charity shop years ago.  What I like about the book is Massingham’s eccentric but poetic descriptions of the birds, for example, this is how he describes the Spoonbill:

“Its companions on the flats are usually Herons, but Gulls will often persecute it for,  it appears,  its very mystery and unearthliness, as though offended like a vulgar mob by the radiance and purity of its shining dress”

…and this passage is included in his description of the the Red-Necked Phalarope:

“…they are so lamentably indifferent to the human prescence and ease of approach that both they and their cousins, the Grey Phalaropes, are frequently stoned to death. The cry is a faint pleeping”.

It is as though Massingham is describing the quirks of wayward children, rather than birds, and there is some charm in this eccentricity. Unfortunately, this charm  may go hand in hand with some dodgy politics.

H.J. Massingham (1888 – 1952) wrote mainly about rural subjects and agriculture. After being educated at Westminster and Oxford he became a journalist, he knocked about a bit with DH Lawrence, and by the 1930s he was writing extensively and almost exclusively on rural matters.

The ruralist revival of the 1920s and 1930s, of which Massingham was part,  was often mixed up in some of the more eccentric far-right politics of the age – especially in its emotional and reactionary belief in ‘the soil’ as the basis of society.  The best-known figure who represents this tendency was Henry Williamson, the author of Tarka The Otter, who was a fascist sympathizer and supporter of Mosley. Another key figure in this revival was Rolf Gardiner a champion of morris dancing, a proselytizer for organic farming, a fan of naturalism and someone who had way too much time for Nazi theories on race and soil.

Massingham, even though he was part of that world, wasn’t a fascist and he objected to the pro-German tendencies amongst elements within the rural revival movement. He does seem to have been, however, a tiny bit bonkers and perhaps his reactionary politics does cast a slight shadow over his often charming and funny anthropomorphic descriptions of birds. Massingham, like a few other reactionaries (and fascist fellow travellers),  went on to play a part in the creation of the Soil Association – where we find the origins of modern organic farming and post-war green politics.