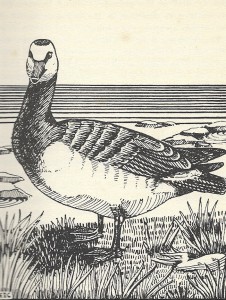 “Why retain this fantastic title for the second member of our Black Goose tribe?

It is derived from the old bestiary legend that geese were hatched of ship-barnacles, a legend fervidly credited by he wise men of old. It is a pity that men have been so slow to recognise the natural wonders of wild animal life that they have frequently invented an insane make-believe about it.

The Barnacle differs from the Brent only in comparative degrees. It is less maritime but even more northerly, It gaggles southwards in autumn down the west coast from the Hebrides to Cornwall rather than the east, but in much poorer numbers upon such celebrated goose-stations as the Dee Estuary and the Solway.

Its habits are more nocturnal than the Brent’s and the flights are probably higher above the earth. This is partly gathered from what happened the year before the War when eighteen Barnacles, winging north to their lonely homes, were struck by lightening over the Solway and shot to earth without having been seen before the gods smote them.

Their Valkyrie cry as they go their airways is not quite so grand and sonorous as that of the Brent, is on higher note and more percussive. It is of the Barnacle the saying goes – “There’s bad luck coming when the hell hounds are on the hunt,” and the mighty din of a gaggle in full cry often suggests an excited yelping”.