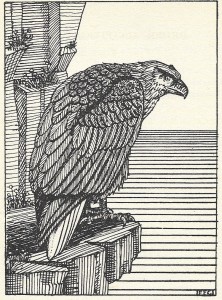 “The home of the White-Tailed Eagle is among the more tremendous of natural bastions against the unwearied sea, and on some veteran pinnacle outposted in the surge it loves to survey a boundlessness of sea and air, heraldically opening its mighty wings as the Cormorants  do on rocky islets or, impatient of this ultimate foothold on the earth, with slow and ponderous winnowing it sails vastly into space, climbing sunwards with flight-plumes that let shafts of light between them, their tips upcurled, their motion still. Spirally mounts the lord of the air until to us he dwindles to a little bird.

Not so royal is his land temper, though less furtive and ignoble than the Golden Eagle’s, the White-Tailed Eagle with loud and ludicrous yelps will allow itself to be bundled off the territory  of some puny, arrogant Rock-Dove, while the smaller Gulls can make it sue piteously for respite from their teasings in the air”