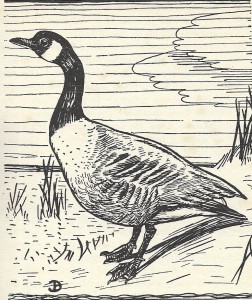 “The Canada Goose is native to the American Continent, migrating from Alaska down the Yukon and so to its winter quarters on the Gulf of Mexico. It is possible that a few of the winter Hebridean birds are storm-deflected strays, though it would surely take a tornado rather than a gale to turn a wild goose from its self-appointed course.

But these geese have been  acclimatised to England as a domestic or ornamental bird since the eighteenth century.

Many of these birds have broken from their polite servitude, and these pioneers have formed and maintained so genuinely a free-living race of wild geese that they have positively added a new species to the British list.

The birds are less nocturnal then the Barnacles, and feed on cultivated land. The succulent mere-grass is a favourite diet. The cry is as wild, deep and resonant as the Brents’, and less shrill than the Barnacles’. Wild geese are said to “honk,” but that is what motor-cars do, not geese. “Homg, hong” is a truer onomatopœism, and the Canada Geese I have heard at Holkham, on the North Norfolk coast, honged their way between sand and sky”.