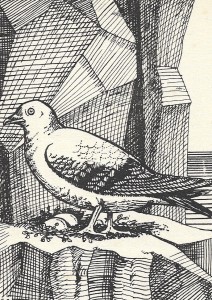 “The Rock-Dove is another species which is a maritime dweller but whose racial and structural affinities are of the land. But it is not so exclusively littoral as the Rock-Pipit, darting inland on swift and rhythmic wing to feed on grain and seeds about the farm-house or in the pastures. Here it commingles with its domesticated descendants, the wild original of them all.

It has a dreadful influence over these tame pigeons, breeding with them so that their young desert the ways of men and revert, even in colour,  to the wild in their later descendants.  It can infect even adult birds with the poison of liberty, and these throw off their ornamentalisms , break with their acquired habits, swing off to a sea-life and indulge in promiscuous gallantries on the farm-house roof no-more.

They become complete outcasts, shunning the human form and oblivious of the benefits of parasitism which man has showered upon them. They become liable to being struck down by Peregrine Falcons and shot by their former protectors, while they are exposed to the full rigours of the northern winter and to every hazard of a free existence. Yet these birds never return to the human fold.

Consequently, you can never be sure whether the birds you see are renegade  fly-aways or the genuinely primitive ” Blue Rock.”  If you see a male pigeon strutting and cooing before his fair one on a rock-ledge half-way up the perilous cliff up, you think – “The parent of these birds trod the farmyard as the stage for this identical scene.”

As like as not, you will be wrong, for this kind of wooing is an inherited memory of the wild in the tame. When a party of birds springs out from the cliff-head and circles low over the sea, rejoicing in the sun and waves whose strength has entered their buoyant flight, and racing pace, you will deny that such grace and command could ever emerge out of a dovecot. You may err again, for it is astonishing how speedily the rebels slough off their civilization.

The true Rock-Dove is a bird of the north and west, nesting abundantly in the Hebrides, the Orkneys and Shetlands and among the rocky Scottish islands. Except for its plentiful colonies along the Welsh coast on Flamborough Head and in parts of Ireland, it is an uncommon bird, with wide gaps between its breeding stations, many of which are now deserted.

The pairs make a rude nest of twigs, grasses, ling or seaweed usually on the higher ledge of a cavern, for like the shag, the Rock-Dove is a troglodyte. Two pure white glossy eggs are laid and the young are fed in the universal pigeon-fashion.