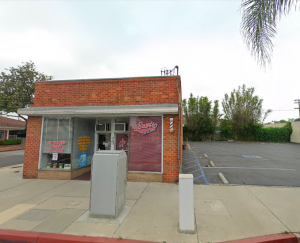 I went to get my hair cut at Sam’s barbershop. I’d been there before and during my last visit Sam told me about his life. He was from Cleveland but moved here to LA when he was a boy because his dad had got into trouble. That’s as far as the story had got. Sam left me with a cliffhanger.

I reminded Sam of where we had got to. He picked up the story.

Sam’s dad was a gangster. Of Sicilian descent, he was connected to organised crime (Sam said he was related to Lucky Luciano). His dad was a violent man and he had used that violence to make money and to get what he wanted out of life. The police were always after him, but they could make nothing stick. Sam’s dad seemed almost untouchable, but then a Cleveland detective made it clear that whoever got rid of Sam’s dad would get a pass, that the police would leave them alone. The cop was offering up a real-world get out of jail card.
This was why Sam’s family fled west. Somewhen in the early 1950s, they packed up everything and moved to LA.

I asked Sam if his father was still involved in crime out here in California.

“He still got money from back-east – and I knew as a kid that you still didn’t mess with him. People were scared of him”.

I asked Sam if he liked Cleveland.

“I hate it. It’s a lousy place. People there either took what they wanted or you had your stuff taken from you. It’s a city full of bastards and losers”.

Sam went quiet for about a minute.

“My dad was a lousy sonofabitch. A real cruel bastard. He hurt people and he bullied everyone, including his family”.

What Sam told me next was horrific. Sam’s description of his dad made his father sound like a psychotic animal. Something sub-human. A monster. You don’t need to know the details. I don’t want to write them down.

“Not a model parent then” I joked, trying to drag the conversation away from the darkest corners.

Sam went with me “On my fifteenth birthday he gave me a carton of L&Ms and a quart of whisky and told me that today you smoke and you drink……. and you leave school.”

After a while, Sam spoke again.

“He taught me to fight as well. He taught me that you fight to win. You use tricks, anything you can to stop the other person. Hit them from behind, scare them into submission and then hurt them bad. Whatever it took. I was a rough kid.”

Sam showed me a photo of himself from when he was about 20. He was handsome – greased back black hair and a razor-thin moustache.

“Once I started working as a barber I calmed down a lot”.

Sam concentrated on my hair. He asked me if I was happy with what he’d done so far. I was.
Out of nowhere Sam suddenly went on

“There are a lot of bastards in the world. When I was a young barber, in the late 50s, I’d cut the hair of all these guys that fought in the war. They’d tell me the stuff you never saw in the films. One guy, a tank driver told me about this German they captured. They tied him to the front of their tank and then just drove with him strapped on – all across France, through bushes and trees, through rivers, through those smashed in towns. They kept what was left of him on the front of the tank for as long as possible. You read the papers and you read about stuff but it’s always worse than what you read”.

Sam had finished cutting my hair. He cleaned up.

“Hey – did I show you this?”. He got a book from a bookcase he had in the shop. It was a collection of front covers from the LA Times going back well over 100 years, right back to the origins of the modern city. Do you want to borrow this – I trust you to bring it back”.

Sam’s shop is in a small building that stands alone between a parking lot and the road. Architecturally it is nondescript, little more than a box, form as function. LA is still a strange and alienating city full of empty spaces and nondescript functional buildings. Sam’s shop is one of the few places I’ve been inside where I’ve got to hear someone else talk about themselves.