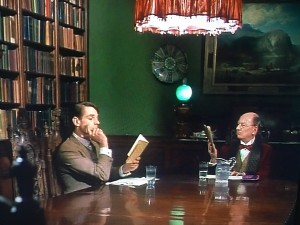 When I first watched the programme when I was a teenager I got caught up in all the stuff about youth and beauty and love  but as I got older I realised that the book is about getting older (duh! – the main theme is pretty much there in the title).

The book is about a middle-aged man looking back at something that has been lost; specifically all that youth and beauty and love stuff, but also the languor that goes with it:

(“..but languor – the relaxation of yet unwearied sinews, the mind sequestered and self-regarding, the sun standing still in the heavens and the earth throbbing to our own pulse, that belongs to Youth alone and dies with it” Brideshead Revisited).

So far, so obvious.

But a peculiarity of the novel, and of Waugh himself,  is that being middle-aged and being old are interchangeable.   At the beginning of the novel, Charles Ryder says, “Here, at the age of thirty-nine I began to feel old”.

Thirty-nine is quite old, but thirty-nine-year-olds, much like twenty-nine-year-olds or forty or fifty or sixty-nine-year-olds, do tend to exaggerate a bit. The weight is felt more keenly on those birthdays,  but despite that, when I was thirty-nine I didn’t feel especially old, I just didn’t feel young anymore. And I certainly had no inclination to act ten years older than I actually was. Waugh, I think, did. Bizarrely – and I don’t know anyone else who has ever done this – he seemed to rush forward into old age – for him thirty-nine may as well be seventy-nine.  Desperate to get there; keen to settle into it; Waugh, more than anyone I can think of, really exaggerated the ageing process.

One of my favourite parts of the  TV adaptation are those scene where Charles returns home during the summer vacation, where he and his father fight a war the causes of which are to do with disappointment, money, time-wasting and control, but which is fought through oblique conversations and where situations develop for no other reason than that they can carry the full weight of unstated resentments.

In this section of the book Ryder describes his father as being in his late fifties but,  “to see him, one might put him at seventy, to hear him speak, at nearly eighty“.  Again, in this novel age is exaggerated upwards.  Everybody is older than they are.

When I finished watching this particular episode on TV. I picked up Philip Eade’s recent biography.  ‘Evelyn Waugh: A Life Revisited’, which I haven’t read yet. I read the preface, which opens by recounting part of this scene where Ryder and his father fight this unstated war of control and attrition 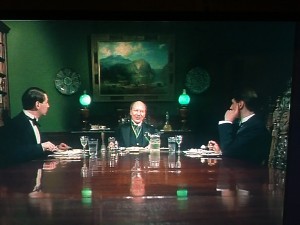 (From the prologue) “In one of the funniest scenes in Evelyn Waugh’s novel Brideshead Revisited, Charles Ryder’s father pretends to suppose that his son’s very English friend Jorkins is an American

‘Good evening, good evening. So nice of you to come all this way”

“Science annihilates distance’ said my father disconcertingly. “You are over here on business?” (Preface xxiii)

Eade then goes on to say that Waugh himself would act like this:

“A brilliant and extraordinarily clear writer, Evelyn Waugh could hardly have been easier to understand and enjoy on the page; yet the peculiar traits of his character were often harder to fathom, inclined as he was to fantasy, comic elaboration and mischievous disguise. If the imaginative flourishes in his letters were intended to entertain the recipients, the eccentric and sometimes frightening façades he adopted in person were more often designed as defences against the boredom and despair of everyday life”. (Preface xxiv)

I’m pretty sure that this premature embracing of old age was one of these facades that Waugh adopted. He himself, in his fifties, acted as if he was in his seventies. He had the extraordinary habit of carrying a hearing trumpet, like some mad old duffer. He also took to wearing the sort of Edwardian clothing that would have been the dress that those who were twenty years older than him would have worn when they themselves were young.

In Vile Bodies, the hotel where Adam Fenwick-Symes lives, The Shepheard’s Hotel, is a faded hotel that was fashionable during Edwardian times. In the same way that I am fascinated with the music, books and records from the decade I was born (the sixties) Waugh seemed to be fascinated by what was fashionable in the Edwardian during which decade he was born – but then, weirdly, he clung to it as if it was his own youth.

In my fifties, I still wear the Levis, DMs and Adidas Kick that I wore when I was younger. I’m sure that’s normal-ish behaviour. People often wear what they wore when they were younger (I am looking forward to 2035 and the sight of fifty-something men in skinny fit jeans). But Waugh, as he got older, did not wear the fashions of his youth; instead, he wore the fashions of the decade in which he was born.  Instead of Oxford bag,  he wore tartan capes and herringbone suits. In doing so made himself appear two decades older than he actually was.

That scene between Charles and his father in Brideshead is Waugh writing two versions of himself . First, he is looking back to his time at Oxford and to when he was the love-struck undergraduate entering the gilded, strange and magical world of self-loathing aristos (Waugh used this ‘Alice In Wonderland device of entering a new world’ story structure a few times in his work. It’s also what really happened to him). But he wrote himself as an old man, and someone who was wilfully old before his time, someone who was eccentric difficult and controlling. I think that this was exactly the kind of man that Waugh was becoming in the nineteen-forties when Brideshead was published.

It also adds a unique tension to a novel about memory because as well as reimagining his past Waugh is also projecting himself forward twenty years. It’s normal for people to look back but not at the same time as they long to jump forward in time. Or to put it another way, Bridehead is a novel written by someone in their forties who simultaneously longs to be in their twenties and their seventies. 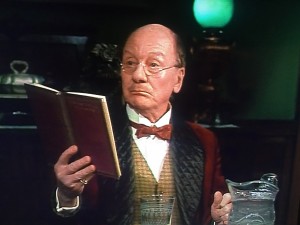 An aside: I love these scenes where Ryder return home in the TV adaptation because John Gielgud, who plays Ryder’s father, does that thing that Gielgud, at his best, perfected.

When you see him act it’s as if there is a tiny but important part of him, tucked away deep in some inner corner, which is watching the performance with a measured and wry bemusement. He acts as if has a slight distance on himself. It’s the total opposite of method acting and is about thought rather than instinct. In this scene Charles Ryder/Jeremy Irons knows that he is no match for his father/John Gielgud – and every aspect of that equation makes the scene fizz and crackle.